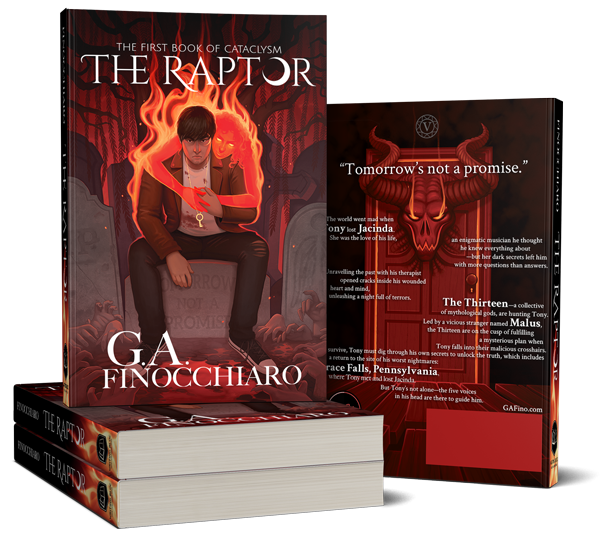 “Tomorrow's not a promise.”

The world went mad when Tony lost Jacinda. She was the love of his life, an enigmatic musician he thought he knew everything about—but her dark secrets left him with more questions than answers.

Unravelling the past with his therapist opened cracks inside his wounded heart and mind, unleashing a night full of terrors. Were they real? Was his mind finally coming undone?

The Thirteen—a collective of mythological gods—are hunting Tony. Led by a vicious stranger named Malus, the Thirteen are on the cusp of fulfilling a mysterious plan when Tony falls into their malicious crosshairs. To survive, Tony must dig through his own secrets to unlock the truth, which includes a return to the site of his worst nightmares: Grace Falls, Pennsylvania, where Tony met and lost Jacinda.

But Tony’s not alone—the five voices in his head are there to guide him.

BUY NOW FROM THESE RETAILERS

Available wherever books are sold online.

THE RAPTOR started out as a tiny idea back in 1996, sitting in the back of my High School's Art Class, sketching out ideas. I was always fascinated with mythology and the number 13. Depending on where you grew up, the number 13 could have represented good or bad omens, and I had this vision in my head of one man against 13. Twenty-Six years, multiple title and plot changes later, and a whole lot of life lived in between, I finally feel like THE RAPTOR has matured into the story it was meant to be.

At its heart, THE RAPTOR is a love story—not a fairy tale about a prince-charming and some manic-pixie-dream-girl. I wanted the love story at the center of this dark fantasy filled with monsters, mystery, and mayhem, to be as real as possible.